Financial problems, playing essentially a youth team with some ringers and dreadful form amazingly hadn’t stopped Hearts reaching a cup final this season. Beating Inverness on penalties in the semi-final had got us here and while at first I had reservations about coming to the final (especially after sacking manager John McGlynn), a night at Tynie watching Hearts vs St Johnstone showed I needed to back the boys. And besides, I’d seen a St Mirren vs Hearts cup tie in this competition before, it was time to avenge that. 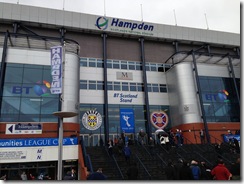 A Hampden Park has actually hosted football since October 1873 where it housed the oldest club in Scotland, Queens Park. The club asked to move to larger ground and Henry Erskine Gordon agreed to sell 12 acres of land off Somerville Drive to Queen's Park in November 1899. James Miller designed twin grandstands along the south side of the ground with a pavilion wedged in between and the natural slopes were shaped to form banks of terracing, designed by the main man himself, Archibald Leitch. Hampden Park was the biggest stadium in the world when it opened in 1903 (surpassed by the Maracanã in 1950) and hosted it’s first match in October of that year when Queens Park beat Celtic 1-0. Scotland played England here in for the first time in 1906 and the stadium has since become the primary home of the national team. Queens Park made improvements in 1909 and in 1914 when a fire destroyed a pavilion and was replaced by a four story press box. Hampden hosted its first European Cup final in 1960 when Real Madrid famously beat Eintracht Frankfurt 7-3 and has since hosted the final twice more (in 1976 and 2002) as well two Cup Winner’s Cup Finals and the 2007 UEFA Cup Final. By the 1970’s Hampden was starting to show its age and was in desperate need of redevelopment, especially after the Ibrox Disaster of 1971. When funding was not made available by the UK Government and Glasgow District Council, a public appeal and minor repair work kept Hampden going, but it couldn’t last.

The first phase of the redevelopment saw the demolition of the North Stand and concreting of all terraces to reduce the capacity to around 74,370. After more work to turn the West Terrace into all seating, the UK Government finally provided a grant to turn Hampden Park into an all seater stadium and it hosted its final match in its old state with the 1992 League Cup Final when Rangers beat Aberdeen 2-1. Hampden’s first match in its new state was the 1999 Scottish Cup Final when Rangers beat Celtic 1-0 through a Rod Wallace goal. The ground is now all seater with 4 identical stands that loop around the old Hampden bowl. Sadly, one feature of the old Hampden was the standing/seats that were right on the touchline and close to the action. That has now been removed due to the extended relief track that now goes around the ground meaning that if you are behind the goals you are miles away from the action. (We had the 2nd highest seating row in the ground – binoculars needed) The ground will be undergoing more (temporary) reconstruction for the 2014 Commonwealth Games as the athletics will be held at the National Stadium. 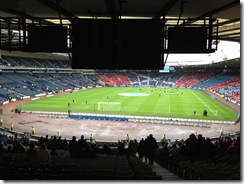 Hearts had technically only won 1 game to get to the Final. A 3-1 win against a poor Livingston side put them through the 3rd Round before beating both Dundee United and Inverness CT on penalties to reach the Hampden showcase. As previously mentioned on the blog and frequent times on Twitter, this had been a poor season but we had bigger fights against us in the form of unpaid tax bills and financial meltdowns. Losing to St Mirren a few weeks before this game had also cost John McGlynn his job as we were 11th in the SPL. (Thank God for Dundee being a 1st Division side) The day before the match, caretaker boss Gary Locke was made first team manager until the end of 2013/14 – a decision which has gone down well with most of the fans. St Mirren had entered a round earlier in the tournament but had seen off Ayr United (5-1), Hamilton Accies (1-0), Aberdeen (on penalties) before their surprising (but fully deserved) 3-2 win over Celtic in the semi-finals. With both sides quite evenly matched and both in poor form – this had the makings of an extremely tight game. 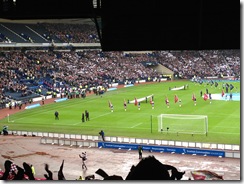 As the game started, Hearts were easily the better side as we looked really up for it and put the St Mirren defence under pressure from the off. The St Mirren defensive pair of Paul Dummett and McAusland were being forced to work hard to make a series of clearances as Hearts pushed forward. What we needed was an early goal and it arrived on 10 minutes. Saints captain Jim Goodwin flew into a tackle but only managed to allow the ball to break to Ryan Stevenson who was now one on one with Dummett. Stevenson kept his nerve and fired his shot off Dummett and past Craig Samson in the Saints goal. BEDLAM. A good 20,000+ fans in the Hearts end went mental as we had an early lead. St Mirren didn’t look particularly good at all, although they did have a danger man in the form of Gary Teale on the right wing. Teale was giving McHattie all sorts of problems and frequently had to rely on Danny Wilson to bail him out. That being said, it should have been 2-0 on 21 minutes. Jamie Walker darted away down the left and sent a brilliant cross into John Sutton who’s header came back off the post. St Mirren slowly came back into it but had Michael Ngoo managed to get on the end of Mehdi Taouil’s cross you might have thought that would be it for the Saints already. As it was they snatched a completely undeserved and needless equaliser before HT. A long punt forward found Gary Teale as McHattie tried to play a dreadful offside trap. Teale raced away and while could have fired a shot past Jamie MacDonald, he squared the ball to Esmael Goncalves who had an easy tap in. Not the best thing to go into HT with but having outplayed St Mirren for the majority of that half, it still looked ok. 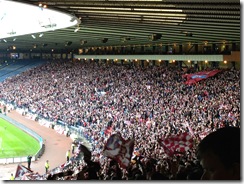 Therefore being 2-1 down within 2 minutes of the restart was a complete surprise. Hearts froze again as St Mirren pushed forward and Dummett’s low left wing cross was hammered in through Steven Thompson for a scoreline that looked impossible some 30 minutes earlier. We waited for a response, it never came. Only Taouil and Stevenson looked capable of producing something that would created an equaliser as Sutton and Ngoo upfront become more and more isolated. While Hearts got worse, St Mirren started to dominate and while it was welcoming to see Dylan McGowan block a Steven Thompson shot, the Buddies added a 3rd on 66 minutes. On loan Newcastle player Conor Newton, who had largely been anonymous up until that point, broke through the midfield and played a good 1-2 with Goncalves before smashing a shot past MacDonald to make the game safe it appeared. Locke tried mixing it up with Arvydas Novikovas and Jason Holt coming on as well as surprisingly taking off Taouil to get a goal back. That nearly came on 83 minutes when McHattie skipped past some weak Saints challenges and set up Stevenson in the box but he amazingly crashed his shot off the crossbar. He wouldn’t be denied a minute later however as he was again sent away down the left and fired a low shot past Samson and into the bottom corner. Hearts now pushed everyone forward and Stevenson nearly had his hattrick in the last minute when a powerful low shot was just turned behind by Samson. Four minutes of injury time came and went but the ball was mainly played in our half so it wasn’t a surprise to see us create no more chances and see the Buddies win their first ever Scottish League Cup. 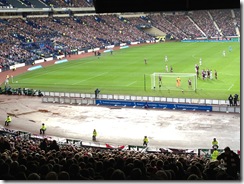 The thing about having seats so high up at Hampden and on the end of a row is that you can make a quick escape afterwards so you don’t have to watch another team pick up the trophy. On the long walk back to Glasgow’s city centre we could dissect where it all went wrong as for the first 30 minutes, there was only going to be one winner in this game. However, if you go missing for long periods in a cup final, you probably won’t win it. So credit to St Mirren for hanging in there and taking their chances and yet again we rue not having a player that can take these numerous chances we always seem to create. This confirmed it has been a dreadful season for us but hopefully a positive takeover in the summer and some more stability can see us back up towards the top of the SPL where we belong. Back in Edinburgh, we walked past some of the route that the victory parade would have gone past to see the barriers and signs up – a sad sight and “it could have been”. For the neutral, this would have been a great game to watch. To lose, you’ve just got to pick yourselves up and go again. Hopefully, we’ll have the opportunity to do that next season. 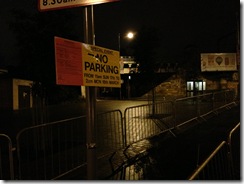 Photos from Hearts vs St Mirren 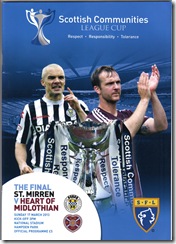