Despite the hammering we received on my last Morecambe outing, I’m always keen to see the Shrimps at the various tinpot towns and cities that host League 2 clubs. With games running out for them in the south of the country this season, it was time to make an effort to the “middle-class university city” of Oxford. (I prefer Cambridge) 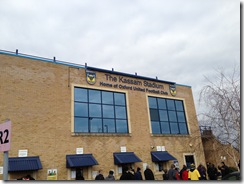 Oxford is a city in central southern England and is the county town of Oxfordshire. Its industries include motor manufacturing, education, publishing and a large number of information technology and science-based businesses. Oxford was first settled in Saxon times, and was initially known as "Oxenaforda", meaning "Ford of the Oxen". In the 10th century Oxford became an important military frontier town between the kingdoms of Mercia and Wessex and was on several occasions raided by Danes. Oxford's prestige was enhanced by its charter granted by King Henry II, granting its citizens the same privileges and exemptions as those enjoyed by the capital of the kingdom; and various important religious houses were founded in or near the city. The University of Oxford is first mentioned in 12th-century records and the earliest colleges were University College, Balliol and Merton. During the English Civil War, Oxford housed the court of Charles I in 1642, after the king was expelled from London. In 1844, the Great Western Railway linked Oxford with London via Didcot and Reading and other rail routes soon followed. During WW2, Oxford was largely ignored by the Germans during the Blitz due to the lack of heavy industry that would have made it a target, although it was still affected by the rationing and influx of refugees fleeing London and other cities. It has been claimed that Adolf Hitler. gave instructions that Oxford should not be bombed as he was impressed by its architecture and had plans for it to be his capital should Germany win World War II. On 6 May 1954, Roger Bannister ran the first authenticated four-minute mile at the Iffley Road running track in Oxford. 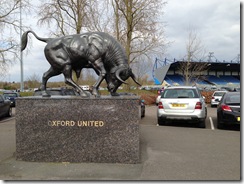 Oxford United was formed as Headington in 1893, adding the suffix United in 1911 after merging with Headington Quarry. Like many other clubs, a football team was a way for the cricketers of Headington Cricket Club to maintain their fitness during the winter break. Headington had no regular home until 1913, when they were able to purchase Wootten's Field on London Road, but this was redeveloped in 1920, forcing the club to move. A permanent home was found in 1925, when they purchased the Manor Ground site on London Road. In 1899, six years after their formation, Headington United joined the Oxfordshire District League Second Division, where they competed until the outbreak of WW1. In 1921 the club was admitted into the Oxon Senior League where they developed a rivalry existed with Cowley F.C. A move into professional football was first considered during 1948/49 and the club played its first season in the Southern League in 1949. In 1950, Headington United became the first professional club in Britain to install floodlights and used them on 18 December against Banbury Spencer. In 1960, Headington United was renamed Oxford United, to give the club a higher profile. Two years later, in 1962, the club won the Southern League title for the second successive season and was elected to the Football League Fourth Division, occupying the vacant place left by bankrupt Accrington Stanley. 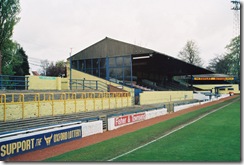 Two successive eighteenth-place finishes followed, before promotion to the Third Division was achieved in 1965. In 1982, as a Third Division side, Oxford United faced closure because of the club's inability to service the debts owed to Barclays Bank, but were rescued when businessman Robert Maxwell took over the club. In March 1983, Maxwell proposed merging United with neighbours Reading, to form a new club called the Thames Valley Royals, however both sets of fans protested against the decision. After successive promotions, Oxford played First Division football in 1985/86 and stayed up as well as winning the League Cup with a win in the final over QPR. The U’s were relegated in 1987/88 and haven’t returned to the top tier since and slumped further down in 1993/94 when the were relegated to the newly named Division 2. They did come back up in 1995/96, finishing 2nd behind rivals Swindon Town but started to slump under a series of mismanaged and behind the scenes mess. A new stadium was started, but then stopped after the construction company claimed they had not been paid, before Oxford United staff also went unpaid as the threat of administration came in. While Firoz Kassam came in, and started to settle the debt and the unfinished stadium, Oxford slumped more and were relegated down to Division 3 in 2001. Even though the new stadium was there, after opening in 2001, Oxford dropped out of the league altogether in 2006 when they lost a “kill or be killed” game against Leyton Orient who went up as a result. Life in the Blue Square is hard and Oxford found that out as it took them 4 years to come back up when they won the play-off final against York City. Since returning to the Football League, promotion has been expected but they have not been in the playoffs since their return. 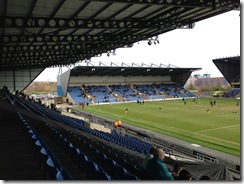 I’ll be honest with you from the start and say I did not enjoy the Kassam Stadium as a good place to watch football. The Football Ground Guide describes “Oxford railway station is over four miles from the ground and it is really not advisable to try to walk it.” I saw this as challenge accepted and so took the pleasant 4.6 mile walk through the city and down to the Kassam. Upon arrival this isn’t great. A plastic fantastic 3 sided ground with not an inch of personality or uniqueness around it. Having seen pictures of Oxford’s old Manor Ground, this could not be more different. A smallish stand behind the goal that holds the “hardcore” Oxford support it would seem with the long North Stand down one side and opposite the South Stand. The lack of 4th stand just adds to the misery although some of the Shrimps fans that came along occasionally broke out with “Car Park! Give us a wave!” Can’t imagine watching football here every 2 weeks. Awful. 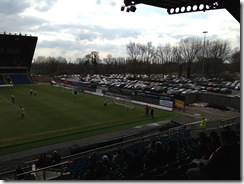 Both sides were lumping around in midtable on the cusp of either making a late playoff run or making themselves available for Tuesday night games on Premier Sports in the Blue Square Premier. Since that battering I saw against Barnet, Morecambe’s form had been stuttery and had seen us pick up two credible draws against Northampton and Gillingham before an awful away defeat to AFC Wimbledon. This left us in 13th, 10 points outside of the playoffs. Oxford on the other hand expect to be in the playoffs at the very minimum and were in real danger of missing out. Being 6 points away from that 7th place, meant the pressure was on boss Chris Wilder and his side as he would surely be punted if the O’s missed on. An interesting game was in store, backed by a decent Good Friday holiday crowd. 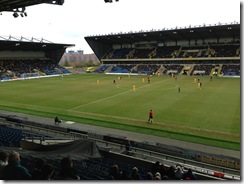 That interest quickly disappeared after about 5 minutes as it was clear that this game was going to be gash. And really gash at that. Oxford did start the better side though as the midfield was overrun, again! (See Barnet, Wycombe, etc) Tom Craddock had the early chances for the home side as he first had a shot/cross that ended up neither as he put an aimless ball wide. Then he collected a long pass forward that had he shot first time would have caused Barry Roche problems as he was off his line. In the end Craddock, curled a shot just wide as Oxford were on top. The pattern of play however was dreadful as neither side was playing particularly well although Alfie Potter headed a chance wide midway through the half. Morecambe woke up though and nearly took a sensational lead on 38 minutes when Steward Drummond powered a header towards goal from a corner but Potter headed off the line. Apart from that this was a game that seemingly didn’t matter to either side and it showed. 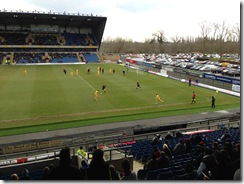 The 2nd half started off even slower, so much so, that I didn’t even bother to stand up for the start of the half. It really was a desperate half of football. Neither side had offered that much until petulant little shit Potter managed to give Oxford the lead. The ball was played into the area and Potter was given far too much space to allow to turn past Chris McCready with ease and fire a shot that Barry Roche could only palm into the net. Frustratingly you could see this coming and Oxford nearly made the game safe when Sean Rigg was put through on goal but Roche made an outstanding low save to keep the Shrimps in it. Morecambe did look more of a threat when Jack Redshaw came on later on as Kevin Ellison fired a curling shot just over the bar as it looked like Oxford would do enough to keep their playoff challenge going. Into injury time and a chorus of “stand up if you love the Shrimps” started so I stood as we won a late late corner. Chuckling to myself as Roche went up for it, he caused panic for the Oxford defence to allow an unmarked Redshaw to head home on 95 minutes and cause the c.150 Shrimps to go mental at the unexpected equaliser. FT came straight away and the Wilder out chants started again. After the game, I thought that neither side deserved to take anything from this game so a draw was probably a fair result. As I am writing this so long after the match (blame year end accounting for that!), both teams have finished their seasons now, unsurprisingly outside of the playoffs. Morecambe picked up impressive wins over Rotherham and Southend to finish on 58 points in 16th place. An improvement over last season and hopefully something to build on for 2013/14. Oxford were slightly higher 9th, only 4 points off the playoffs. While Wilder might have lost his job, a one year contract extension shows he has to get it right next season. I would love for Oxford fans to comment on the good points of the Kassam, as I find it a dreadful place and won’t be returning. If you want to see them all though…

Photos from Oxford United vs Morecambe 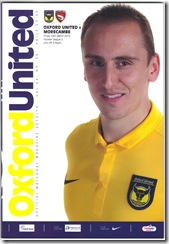 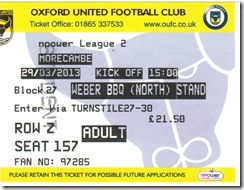