Imagine supporting a team that hadn’t won for 61 league games in a row, 61. That stretches over multiple seasons and includes many, many hammerings. Welcome to the world of a Gateshead Thunder fan. When I first got into rugby league and was asked to pick some teams out of a hat to support, I did draw Gateshead Thunder out to support but my first love has been Wakefield as Thunder lurked around in the background. I was up in the area and Thunder were playing away from their usual home, it was off to South Shields to see if they could finally pick up that elusive win. 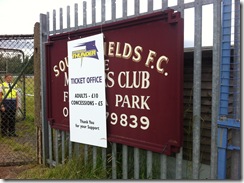 Since I last saw Thunder back in July 2010 when Oldham RLFC cruised to an easy win, the club have obviously struggled on the field and have lost every league game played. Their last league win was March 2010 when they beat the London Skolars 24-18 but still finished bottom of Championship 1 on –2 points after losing 6 for entering administration. An away draw against Skolars were their only two points for 2011 (and finished bottom again) before this season has saw them lose all of their games so far but narrow defeats to South Wales Scorpions (30-32) and Whitehaven RLFC (18-30) has seen them pick up 2 bonus points and so they have already equalled last season’s points total with 5 games still left to play (including this one). 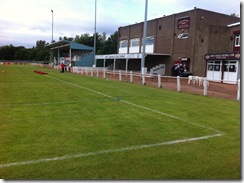 While on the pitch is a struggle, Thunder off the pitch have vastly improved since their financial troubles ended in 2010. Being a local community club and a better business model, they have made a profit each year under the Thunder Rugby Ltd company since November 2009. They have also brought in a lot of local based players to try and expand the game in the North East which is very much a rugby union area (with Newcastle Falcons being the biggest team around here for ruggers). This off the field work hasn’t gone unnoticed as they won the 2011 The Co-operative Community Programme of the Year. With a local core that will improve as time goes on and profit being made off the field, Thunder do look in a reasonable position currently. Although results will have to improve at some point before attendances really drop and the sponsorship dries up. 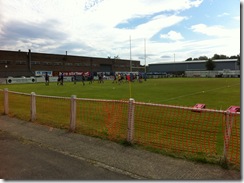 Gateshead were playing this game at Filtrona Park in South Shields as the International Stadium’s pitch was being relaid over the summer. Filtrona Park is currently home to South Shields FC, however the owner of the site is looking to sell up and so SSFC’s days playing here could be over shortly. (They are currently listed on the Northern League website as playing here still for 2012/13) The ground itself is actually a fairly bland one at the end of a industrial estate. Only one side of the ground has any features with a small covered standing area as well as a small seated stand that sits along side the clubhouse area. The rest of the ground is just uncovered hard standing which doesn’t help the atmosphere. There are suggestions that Thunder want to pay the £350k for the ground for their use and share it with South Shields. Whether this happens it remains to be seen but hopefully they would change some of the ground as the matchday experience can be improved. Only two sides of the ground are actually open (not sure why) which is quite frustrating and the PA system needs some TLC to make it actually understandable but like most places, it does have some potential. 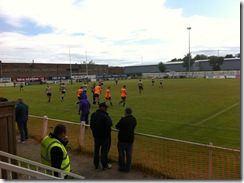 London Skolars were actually themselves whipping boys not a long time ago but have seen some investment into the club and a very good academy show that for London rugby league, it is not all about the Broncos. Going into this game with 3 wins to their name and 2 bonus points, the Skolars actually had an outside chance of the play-offs which would be a great achievement for them. Thunder looked at this game with one they could possibly take something from and as they kicked off towards the Skolars, there was some belief about them that this could be the day. However, that kick off went straight into touch to hand the initiative to the away side. The Skolars took full advantage and didn’t even need to complete a full set as Joe Price managed to go over after just over a minute. Oh dear. It got worse as the Skolars scored 3 quick tries soon after as the score went to 0-22 very early on. Thunder were also becoming increasingly frustrated with referee Tom Crashley who gave some awful penalty decisions against them which Skolars scored from. On 24 minutes, Gateshead did have a try back when Paul Stamp showed some great turn and pace to highlight the Skolars weak defence as he scored under the posts. It didn’t matter too much however as Skolars added another 4 tries before HT, with Thunder’s right hand side getting carved open far too much. At HT it was 38-6 and the game was pretty much over already. 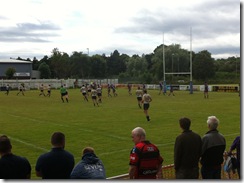 “Stay strong early on!” Thunder didn’t manage this for the 2nd half as Joe Price went over the line within 5 minutes to complete his hat-trick after an overlap was created through the middle. Skolars added more points when Andy McLean went over as Thunder’s full back had completely given up (at least make a challenge man!) by this point. The home side did have a few opportunities in the half to have a real go at the Skolars back line and it was no surprise to see them score on 62 minutes through Olly O’Mara. Skolars kept coming forward though and added more tries through Matt Thomas, Brad Hopkins and Dylan Skee for the Skolars to declare on 64. Gateshead did have the final say of the day however when they added their 3rd try through Joe Brown to get them into up onto 16 points. 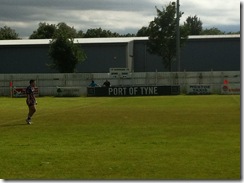 This wasn’t a massively enjoyable day out with a match that really wasn’t a contest at a ground which I am not a fan of. Gateshead Thunder are at a crossroads here and I hope they can start to improve on the pitch (which will surely happen over time) to compliment their already excellent off the field work and situation. I was slightly disappointed with the Skolars attitude during the game too with some disrespectful remarks and actions which showed this is a side that isn’t used to winning. The Skolars scored 64 again in their next game with a 64-6 win over the South Wales Scorpions. This is probably the team Thunder need to look at catching up with rather than the Skolars. As I left the ground I overheard a conversation, “we need to be given straightjackets!”, “another crushing defeat”, “na, just a defeat”. These guys do it every week. They’ll win one day.

Photos from Thunder vs Skolars 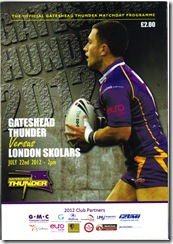