55 days. That is 79,200 minutes without football. Yes, I did have the Euros and got to see another “brave” England exit but there is nothing like turning up at ground and watching some live football. Thankfully the barren off-season was over and my 2012/13 season was ready to begin. The first big choice was where to begin? The friendly lists for this pre-season weren’t some of the best I’d seen so I decided to copy what I did to open my 2011/12 season. A Blue Square South club vs a Football League one. 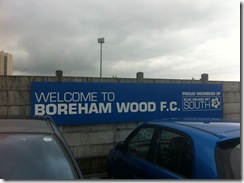 Borehamwood is a town in southern Hertfordshire, situated 16.5 miles north of central London and is in the parish of Elstree & Borehamwood. One of the earliest mentions of Bosci de Boreham (Wood of Boreham), is in 1188 in Matthew Paris’ Chronica Majora which states,

“In 1188 Pope Clement granted to the kitchen of the monastery the whole land of Elstree. He also gave to the Abbey the wood of Boreham for the feeding of the swine.”

Up until 1909, the town was part of the ancient parish of Elstree and the two still share a local council. From the 1920s onwards, the town became known as one of the main centres of the UK film, and later television, industries due to the presence of production studios. “British Hollywood” saw many well-known movies including 2001: A Space Odyssey, Moby Dick, The Dam Busters, and The Shining as well as the first three Indiana Jones films and the first three Star Wars movies being partially filmed at the former Associated British Studios in Shenley Road. These were partly demolished in the 1980s to make way for a supermarket and an office block complex. Following World War II, the town's population greatly increased, with large areas of council housing set up for displaced Londoners, many of which are now in private ownership. Fast train connections to central London have resulted in the town becoming a primarily residential suburb. Boreham Wood is currently undergoing a substantial housing transformation which has seen hundreds of new homes built over the last five years. There are currently two further developments being built and more are expected. 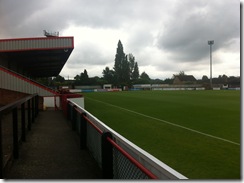 Boreham Wood are actually a fairly new club (compared to others) as they were formed in 1948 as a result of a merger between Boreham Rovers and Royal Retournez. It’s early days were spend in the Mid-Herts League and the Parthenon League before joining the Spartan League at some point (most likely) in the late 1950s. After finishing 2nd in two out of three seasons they made the step up to the Athenian League 2nd Division in 1966 and quickly launched up to the Premier Division by 1970. Their upward spiral continued in 1974 when they joined the Isthmian League 2nd Division and were playing in the top flight by 1977. Their first relegation happened in 1982 when they finished bottom of the Isthmian 1st Divsion and they weren’t promoted back to the top flight until 1995. After showing bouncebackability in 2000 for an instant return to the Isthmian Premier, they floated around until 2009/10 when they finished 4th and qualified for the play-offs where they saw off Aveley and Kingstonian to seal promotion to the Conference South for the first time – the highest level they have ever played. 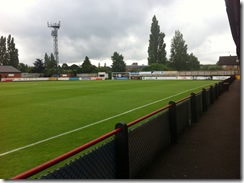 Finishes of 14th and 8th suggest an improving side and Wood boss Ian Allinson has been given the task of promotion this season and backed with a decent core squad and the excellent PASE (Programme for Academic and Sporting Excellence) system starting to show more and more promise, the future looks good for the Wood. Their Meadow Park ground is an easy walk from Elstree & Borehamwood station and fits in well in the surrounding area. Behind both goals are uncovered standing terraces that provide decent enough views. Running down one side is a covered standing area that provides a shallow terrace where as the opposite side is the large seated main stand. With some tall trees around and the overall suburban feel, Meadow Park is a nice venue and one that is recommended. A final shout out to the BW clubhouse which takes over Hillingdon Borough’s as “most like a nightclub” – a very slick venue. 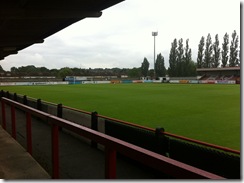 The Wood were playing all of their PSFs against Football League/Premiership opposition and after a credible 1-1 draw against a West Ham XI in their first game they welcomed League 1 Stevenage. I had tipped The Boro for relegation last season and was promptly proved completely wrong (again) as they finished 6th and in a play-off place. They were unlucky to lose in the Semi-Finals to Sheffield United (before they laughably balls up their promotion too) and come into this season with Gary Smith’s first full one in charge. It appears the HOOF ball tactics adopted by ex manager Graham Westley have been dropped (now taken up at Preston North End, managed by, Graham Westley) for a more slick style of play under Smith. Signings such as Marcus Haber and ex Hibee Filipe Morais look decent for League 1 and they appear to be dark horses yet again this season. (I won’t be tipping them for relegation) 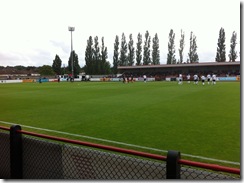 Stevenage played a different XI for both halves and it became clear very quickly that for the 1st half it was a team mainly made up of youth and reserves as the home side started to dominate. Wood’s “big man up front” Inih Effiong had the first chance of the game when Chez Issac picked him out in the box with a high cross but he fired over the bar. Issac was actually dominating in midfield and the Wood man was pulling the strings as Stevenage’s Anthony Grant and Nathan Evans were struggling to contain him. The home side looked the most likely to score and did so on 25 minutes. Effiong was put through on the left and his powerful shot took a deflection to beat Chris Day at his near post. Stevenage did improve slightly after the goal as they began to get a bit more possession and Robin Shroot was unlucky to miss a cross from Lee Hills as the League 1 side were 1-0 down at HT. 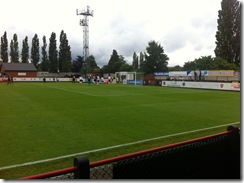 The Stevenage team for the 2nd half saw more of the big guns such as Morais, Freeman and Haber come out and Stevenage equalized within 2 minutes of the start. They won a corner and Morais sent an excellent delivery in for Haber to power home a head past James Russell. At this point I thought Stevenage would end up scoring 2 or 3 more with this team as they had Wood completely on the back foot. Morais had an excellent free kick saved by Russell and then had to defend well from some excellent crosses as Haber was showing himself to be a great target. BW surprisingly nearly re-took the lead as David Hutton fired in a long range effort but 2nd half goalie Steve Arnold was comfortable. Stevenage’s best chances to win the game came late on when firstly Haber cut back to Dom Knowles who hit the post with his shot and then Freeman forced Russell into an excellent save. Haber should have won it even later on when he was put through one on one with Russell but the Wood goalie made an excellent save. BW managed to hang on to get a 2nd good draw against Prem/FL opposition in their PSFs. 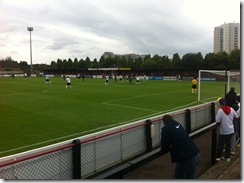 This was a decent but low key start to my 2012/13 season with a game that was actually far better than I expected. With both teams since this game doing quite nicely in pre-season (in terms of results) they could both be challenging at the right end for this coming season. Meadow Park is a nice enough ground and I’ll probably be back here some in the future. Boreham Wood were also extremely helpful in answering e-mails and really polite on the day so credit to this friendly club. It’s a shame they charged £12 for a PSF but they certainly aren’t in the minority to do this so nevermind. As for me, we’re off and running! Who knows what delights I’ll see this season!

Photos from Boreham Wood vs Stevenage 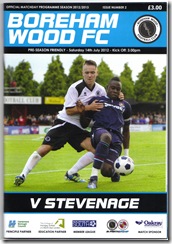