Easter always brings out a great load of games over the extended weekend and gives fans the chance to see their team lose twice in quick succession. For the neutral, the grand choice of games gives them a hard choice. After last Easter’s major excursions out of London to Oxford and Worcester, it was time to stay a bit more local. Having lived in Windsor as a young wee boy (c.1995!), it was a trip back to the royal town and down to the Meadow. 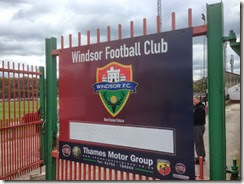 Windsor is a town and unparished area in the Royal Borough of Windsor and Maidenhead in Berkshire. It is widely known as the site of Windsor Castle, one of the official residences of the Royal Family. The early history of the site is unknown, although the site may have been settled many years before the medieval castle was built as there is ample evidence of Anglo Saxon settlement in the area. Windsor Castle was originally built by William the Conqueror in the decade after the Norman conquest of 1066, a timber motte and bailey structure. The town of New Windsor, as an ancient demesne of the Crown, was a privileged settlement from the start, apparently having the rights of a 'free borough' for which other towns had to pay substantial fees to the king. New Windsor was a nationally significant town in the Middle Ages, as its prosperity came from its close association with the royal household. The repeated investment in the castle brought London merchants to the town and provided much employment for townsmen. 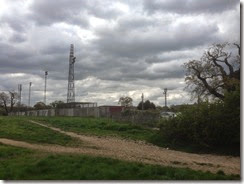 The town however began to stagnate about ten years after the Reformation. The castle was considered old fashioned and shrines to the dead were thought to be 'superstitious'. The early modern period formed a stark contrast to the medieval history of the town. Most accounts of Windsor in the 16th and 17th centuries talk of its poverty, badly made streets and poor housing. Shakespeare's play The Merry Wives of Windsor is set in Windsor and contains many references to parts of the town and the surrounding countryside. The substantial redevelopment of the castle during Queen Victoria's residence from 1840, as well as the coming of two railways in 1849, signalled the most dramatic changes in the town's history. It catapulted the town from a sleepy medieval has-been to the centre of empire with many European heads of state coming to Windsor to visit the Queen throughout the rest of the 19th century. 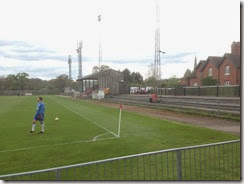 Windsor FC are only 3 years old in their current state after the former club, Windsor & Eton FC folded during the 2010/11 season. Mounting debts for the former club, despite a promotion to the Southern League Premier in their final full season, saw them finished off and the new club started the 2011/12 season down in the Combined Counties League. After a decent first season where they finished 2nd in the league, chairman Kevin Scott came back from the 2012 Olympic Games to remove the playing budget as “the club had already lost its way.” Despite most of the playing staff leaving, new boss Mick Woodham came in and led Windsor and their new young team to a very decent 6th place finish. If they can continue this upward trend, Windsor may well find themselves back at their original level in the not too distant future and in a far better financial state than their previous form. 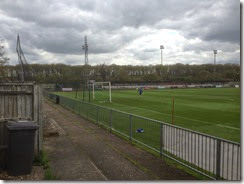 Stag Meadow is found on the southern edge of Windsor and is part of The Great Park that wraps around the town. The ground was placed there in 1911 after an order from the Monarchy that stated an area of The Great Park should be for football. Therefore, an extremely scenic ground that also offers some decent facilities for this level. A Main Stand straddling the halfway line dominates the place, while opposite this is a fully covered standing terrace. With some uncovered terracing around the pitch and a small clubhouse down in the far corner of the ground, Stag Meadow could easily go back to hosting football from a far higher level if Windsor FC ever get there again. Considering some of the dross that is at Level 9 currently, this is one of the best grounds at this level. 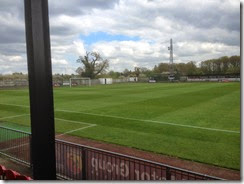 Being one of the best grounds at this level was just as well, as Windsor were nowhere near the promotion spots going into this game. A dreadful run of form had seen them win in the league in 7 attempts and had lost the last 4 games. Despite the lousy form, they were still in 6th place, although a long long way behind runaway league winners South Park. They had however won their first trophy under their new form in the week leading up to this with victory in the Berks & Bucks Senior Trophy win over Reading Town. With a place in the top 5 up for grabs, there was still a good amount to play for The Royalists. 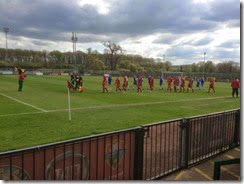 In town for this clash were the mighty Frimley Green who hail from Surrey. Down in 11th, they were only 7 points behind Windsor, which was a fantastic achievement from the club that won the Combined Counties 1st Division last season. The two clubs had met way back in October, when Windsor romped home to a 5-2 win. However, with Windsor in poor form and Frimley looking to finish as high as they can, this game wasn’t meant to be a forgone conclusion. 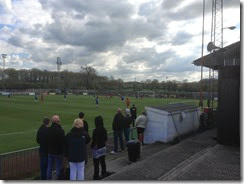 That’s really what it was however, as Windsor tore the Green to shreds. With the away team only turning up with 12 players, it didn’t take too long for Windsor to open the floodgates. When Matt Day crashed the ball past Stuart Norman on 13 minutes, you feared for Frimley and they did well to only keep it at 3-0 at HT. With Day adding another and Kane Jones ending the game as a contest on 39 minutes. The second half was a complete procession with Windsor happy to kick the ball around and Frimley Green getting nowhere near testing Carl Dennison in the home net. Frimley could not deal with Windsor’s #11, Kyle Lucas all game and after Joey Taylor was sent off late on for a daft 2nd yellow, Lucas set one up and scored in injury time to give Windsor a bit of gloss that their domination deserved on the day. 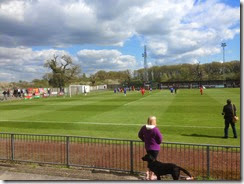 Windsor managed to keep this up for the close of the season as they only lost one of the last 5 to secure another 6th place in the league. However with club captain Dan Hicks moving up a level to join Marlow, Windsor may find it tough again with no budget to try and have a tilt at promotion for 2014/15. Frimley finished 12th for an excellent season back at Level 9 and will look to try and go a wee bit further for next season. Having caught them on a barethread day, and with only 7 fit players who actually started, it is maybe a tad harsh to label them as completely rubbish. Having lived just a 5 minute walk from the ground way back in the early 90’s, it is nice to finally see the place and is well worth the trip down. On a nice day, the excellent setting and the good quality of football that Windsor play make this a recommended visit.

Photos from Windsor vs Frimley Green

- Value for money: 5/10 (seems the norm for Combined Counties League) 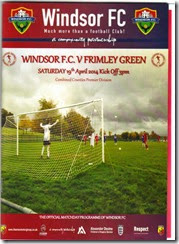