That glorious British weather. A country that is already much maligned for its piss poor climate was really getting battered by the recent storms. While it is a minor point when people’s houses are being swept away and Somerset does it’s best Atlantis impression, this weather is not good for football. As Conference bosses voted against bringing 3G pitches in as some clubs haven’t played for weeks, my planned game was washed away and so another sport was required. Good old rugby league, “is there grass?” “is there beer?” “game on.” Good lads. 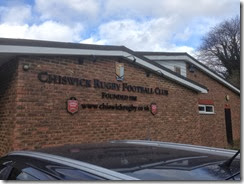 The Chargers currently play their home games at Chiswick RU in South West London. Chiswick is a district of the Borough of Hounslow and was first recorded in c.1000 as Ceswican. The name “Chiswick” is of Old England origin meaning ‘Cheese Farm’ and originates from the riverside meadows and farms that are thought to have supported an annual cheese fair in the area. Chiswick grew up as a village with its inhabitants practising farming, fishing and other riverside trades. By the early nineteenth century the fishing industry in and around Chiswick was declining as the growth of industry and the invention of the flush toilet were causing pollution in the river. Fish began to die out and the river became unsuitable as a spawning ground. Locks upstream also made the river impassable by migratory fish such as salmon and shad. The population of Chiswick grew almost tenfold during the 19th century and the area is a mixture of Georgian, Victorian and Edwardian housing. Suburban building began in Gunnersbury in the 1860s and in Bedford Park in 1875. During the Second World War, Chiswick suffered a number of bombing raids. Both incendiary and high explosive bombs were used, and there was also damage from falling anti-aircraft shells that had not exploded as intended. The first V-2 rocket to hit London fell on Chiswick on 8 September 1944, killing three people, injuring 22 others and causing extensive damage elsewhere. 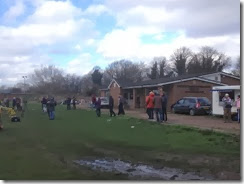 South West London Chargers were formed only last year as a result of the merger between South London Storm and West London Sharks. Picking Clapham Common as a training base, the Chargers entered the RL South Premier last season (essentially Level 4 in the pyramid) and won the league by a point with a narrow victory against 2nd Hammersmith Hill Hoists. The Chargers ensured the perfect season by winning the London Cup as well and will look to defend both of them when the league starts again in April. Entering the Challenge Cup for the first time (although both Storm and the Sharks did, a 2nd Round appearance for the Storm being the best record), the Chargers trying to improve London’s dismal record in this competition. 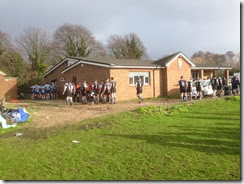 The Chargers play their home games at Chiswick RU’s Dukes Meadow ground, which was formally used by the West London Sharks. Chiswick currently play in rugby union’s (boooo!) London North West 2 league which is Level 7 in the RU pyramid. A basic ground which has the clubhouse on entry and then grass standing around the side of the pitch. Close to Barnes Bridge and the Fuller’s Brewery on the other side of the Thames, Dukes Meadow is a ground in a scenic area that on a great summer’s day, would be an excellent place to watch rugby. (The proper version!) The weather was fairly poor throughout the match and the lack of cover wasn’t great (view from the clubhouse overhang was blocked by the crowd!) but the place does the job for the likely low crowds Chiswick RU would have. 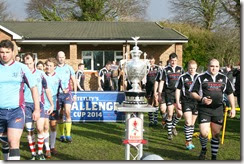 In town for the cup tie were Torfaen Tigers, from the South Wales Premier which they won last year. Currently playing at Cwmbran RU’s Kings Head, the Welsh boys would be a good match for the Chargers with both sides being league winners in 2013. Neither side had started their seasons yet and it showed when the game kicked off, with unforced errors all over the gaff. Chargers, however were backed by a good partisan home crowd and were putting the Tigers under constant pressure. Despite both sides never finishing their sets due to daft mistakes, it always looked like the Chargers would open the scoring first. They did on 23 minutes after good work from Nathan Coughtrey allowed Terance Puna to power his way over. The missed conversion attempt highlighted how tight this game would be and with the Chargers unable to score a 2nd try, you did wonder if the London side would regret it. Despite offering very little for most of the first 40 minutes, the Tigers nearly equalised on the counter attack, but the home side held firm. 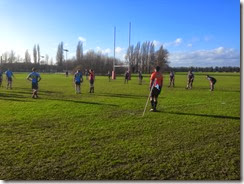 The Tigers were understandably far better in the 2nd half as they began to push the Chargers defence further back. They also had the added bonus of a strong breeze to assist them going forward and so their 5th tackle kicks were causing the Chargers more problems than usual. The reason they weren’t adding more points onto the board was silly misplaced passes or handling errors with dropped the pressure. It was one of those handling errors which sent the Chargers on their way to the 2nd Round. From a scrum, the ball was worked out wide to Tala Petelo who put David Wojciechowicz away down the wing and he cut inside to get over the line with around 65 minutes played. Coughtrey added the conversion and even scored a late penalty to put the game well beyond the Tigers. You felt that the Welsh team deserved at least some points on the board and with the very last move of the game, a lovely long ball out to Gareth Roberts who had the easy task of going over the line. Luke Brown added the conversion but that was it and the Chargers were through to the 2nd Round.

On the balance of play you feel that the Chargers deserved to win, but it was a great cup tie and an excellent way to open my rugby league viewing for 2014. The Chargers have another home tie for the 2nd Round when National Conference One side Milford Marlins come down from Derbyshire. A tough game for the Chargers and you would expect the Marlins to win, but with home advantage, you never know… A decent day out considering it looked sport was well off when Havant & Waterlooville lost another weather battle. Good luck to the Chargers for the rest of the season, London rugby league isn’t dead. Despite what you read!

Photos from Chargers vs Tigers

- Match: 6/10 (entertaining cup tie that was always in the balance)