As part of this season, I intended to visit the “places that I used to know” and catch up on the grounds I missed when I lived in those places. Little did I know, the song “Someone That I Used To Know” would ring so true when I made the first trip like this for the season. With those words in my mind, I made the journey west, to the “rock and roll” town of Chippenham. An old haunt of mine in the mid naughties. 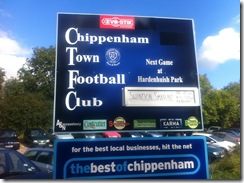 Chippenham is a market town near the Western boarder of Wiltshire and is only 13 miles away from Bath. There are believed to have been settlements in the Chippenham region since before Roman times and remains of Romano-British settlements are visible throughout the town. The town proper was believed to have been founded by Anglo Saxons around 600 and the Anglo-Saxon Chronicle records the town as Cippanhamme which could refer to Cippa who had his Hamm, an enclosure in a river meadow. An alternative theory suggests that the name is derived from the Anglo-Saxon word Ceap, meaning market. In AD 853, Ethelswitha (sister to Alfred the Great) married the King of Mercia in Chippenham. Alfred was at that time, a boy of four. Chippenham was successfully besieged by Danish Vikings in 878, though Alfred escaped. Later that year Alfred decisively defeated the Danes at the Battle of Ethandun, whose forces then surrendered to Alfred at Chippenham, ushering in the establishment of the Danelaw. The wool industry took off in the 16th century due, in part, to the river before the plague caused a recession in the woollen industry. In 1747 a bribery and corruption scandal (involving two members of parliament for Chippenham) led to the downfall of Sir Robert Walpole's government. The last major event in Chippenham’s history was the arrival of The Great Western Railway in 1841 which in turn attracted many new businesses to Chippenham. The arrival of these businesses required new housing which led to the expansion of Chippenham into the land north of the railway line, which in turn led to the growth of further industries to support the building work. 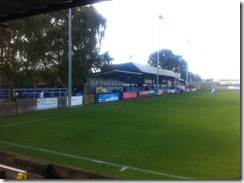 Chippenham Town were formed back in Victoria times in 1873 but didn’t join the Western League until 1904 when they would play against Western giants such as Trowbridge and Radstock. However after a bottom place finish in 1905 and 3rd bottom finish the next season, they withdrew to play more local Wiltshire football. After moving into Hardenhuish Park in December 1919 (more on the ground later) they picked up some Wiltshire League success before rejoining the Western League in 1930. After the War, they won the Western League for the only time in their history in the 1951/52 season. Yet again however they had to drop down to Wiltshire League football in 1964, but yet again rose back to Western League in 1973 before being promoted to the Western Premier in 1981. After years of standard finishes, Chippenham then finished as runners up in the FA Vase in 2000 before finally being promoted to the Southern League in 2001. Their first season at the Southern League 1st Division saw them surprisingly promoted at the first attempt where they have stayed ever since, missing out on promotion to the Blue Square South on several occasions. 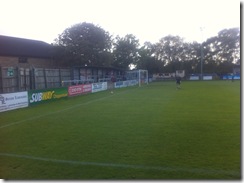 Hardenhuish Park is located just outside the centre of the town, next to Chippenham Sports Club. A compact ground, helped by the trees surrounding it, which would easily cut it in the Blue Square South should the club ever get there. A main stand dominates down one of the sides of the pitch while opposite this is a full covered standing area. Behind both goals are raised terrace areas with the uncovered one being a classic old school standing area that provided some excellent views of the pitch. Having been to a couple of Southern League grounds, this easily equals Tiverton as one of the best ones I had been to in this league. 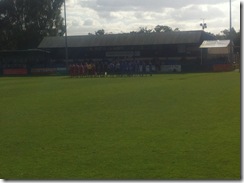 Chippenham’s main aim every season is promotion to the Blue Square South and at this early stage they were slap in mid-table in 11th place. They were only 6 points off the play-offs so at this early stage of the season, it was pointless to write them off, especially as they had won 2 in a row in the league following successes over Banbury Utd and Bashley. Just down the road is the Wiltshire town of Swindon and while most will have heard of the Robins (Town), few will have heard of Swindon’s 2nd team, Supermarine. Based in the north of the town, they are on my list to visit at some point this season, so it was nice to see them in the flesh for the first time. Supermarine play in the Southern League 1st Division S&W after being relegated from the Premier last season. They had managed to get through a feisty FA Trophy Preliminary Round game against Yate Town in a replay. The replay finished 3-2 to Marine but there were 5 red cards shown in the game, 2 of which were Marine players. With this being a local derby, a quiet afternoon was probably not an option. 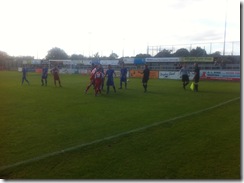 The game hadn’t even settled down when Chippenham took the lead after just 4 minutes. Dean Griffiths managed to get away down the left hand side and floated a ball into the box. There was ex Supermarine striker Alan Griffin who looped his header up and over Marine goalie Kent Kauppinen to make it 1-0. Supermarine couldn’t relax as Chippenham constantly poured forward against a fragile looking away defence and Tyrone Mings had a header cleared off the line as Marine struggled to hang on. When the away team did actually manage to get the ball forward, the home defence marshalled by Mings and Iain Harvey looked comfortable. Only one team were going to score in the first half and Chippenham added a 2nd on 23 minutes when Griffin sent Griffiths through who lobbed Kauppinen and Marine looked out already. The game did get scrappy towards the end of the first half as scuffles broke out over late challenges just like a proper derby should. Chippenham after 45 minutes looked home and hosed already though. 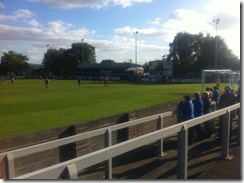 If they looked comfortable after 45 minutes then after 47 minutes it was cigars and brandy time as Marine went missing again at a corner as Griffin flicked on into the 6 yard box where Griffiths reacted first for an easy header and for 3-0. The rest of the game was sadly for Marine, could they keep it at 3-0 as I can’t remember home goalie Conor Thompson being tested at all. They lasted until 67 minutes when Josh Egan fired a low cross from the right which was missed by the defenders to allow Griffin in for his 2nd and goal #4. Chippenham late on brought on Lee Philips, the ex Plymouth, Exeter and Torquay striker and his presence in the box caused carnage as the ‘Nam had chances for a 5th, but Marine held out to keep the score at 4-0 as Chippenham cruised through to the next round. Marine even had a striker sent off late on as it really wasn’t their day. 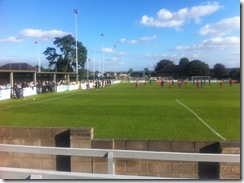 Chippenham have a fairly winnable 2nd Qualifying Round tie against Sholing coming up as they try and continue their impressive cup runs this season. They also have an FA Cup 4th Qualifying Round tie against Gloucester City coming up, which looks extremely difficult but a place in the 1st Round proper awaits the winners. In the league, the Bluebirds are actually heading towards the relegation zone as the cup runs have clearly had an effect on league form with a defeat to Bedford Town and a draw with Arlesey Town. Marine’s only league game since this defeat and me writing this has been a 2-1 win over Cinderford Town to leave them 11th, but only 4 points off the play-offs. I had heard some negative comments surrounding Town before I came here, but I can’t understand why. A friendly club, with a decent ground makes this worth a visit. I’m sure I’ll see the Bluebirds again soon, it’s somewhere I used to know. 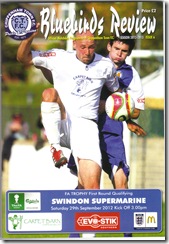 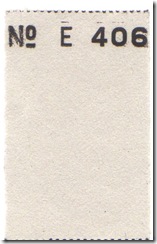