I blame my friend Pete Macmillan. He convinced me to join the rugby league team at uni (a sport I knew nothing about) and then after enjoying playing it (despite being crap) convinced me to pick a team out of a hat to support in the Super League and Co-Op Championship. That team pulled out (for the Super League side) was the medium size side of the Wakefield Wildcats. I was going to take this seriously, I’ve followed the club (from afar) since then and have always intended to go up to the Yorkshire city that I have no connection to. That day had come. 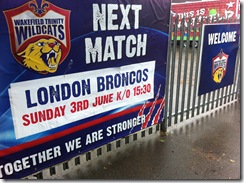 Wakefield is the main settlement and administrative centre of the City of Wakefield, a metropolitan district of West Yorkshire, located by the River Calder. Tools and later iron implements have been found at Lee Moor and Lupset in the Wakefield area showing evidence of human activity since prehistoric times. This part of Yorkshire was home to the Brigantes until the Roman occupation in 43 AD. Wakefield was probably settled by the Angles in the 5th or 6th century and after 876AD the area was controlled by the Vikings who founded hamlets or thorpes around Wakefield. The settlement was recorded as Wachfeld in the Domesday Book of 1086, and covered a much greater area than present day Wakefield, much of which was described as "waste". At the time of the Civil War, Wakefield was a Royalist stronghold however in 1643 the town was taken by the Parliamentarians. In medieval times Wakefield became an inland port and centre for the woollen and tanning trades but by the start of 19th century Wakefield was a wealthy market town and inland port trading in wool and corn which became one of the biggest in the country. When cloth dealing declined, wool spinning mills using steam power were built by the river as well as a glass works, several breweries, soapworks, brickyards and of course mining to give the town a diverse economy. West Riding Pauper Lunatic Asylum was built just outside the town in 1816. During the 19th century, the Wakefield Asylum played a central role in the development of British psychiatry, with Henry Maudsley and James Crichton-Browne amongst its medical staff. 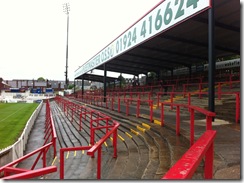 While Wakefield does have a football team (albeit playing in nearby Ossett now) this really is a rugby league city. Trinity Wildcats were founded in 1873 and were one of the original 22 clubs the formed the Northern Rugby Football Union in 1895, making them one of the oldest clubs in the world. Founded by a group of men from the Holy Trinity Church in 1873. Early matches were played at Heath Common (1873), Manor Field (1875–76) and Elm Street (1877) before the club moved to Belle Vue in 1879. One of the initial forces in the game, Trinity won the Northern Union Challenge Cup for the first time in 1909, beating Hull 17-0 at Headingley. The corresponding 1914 final saw the result reversed, with Hull winning 6-0, and proved to be an accurate guide to the teams pre-war endeavours, as Trinity lost four Yorkshire Cups in the 1930s with a side that included club stalwart Jonathon Parkin. The post war years for Wakefield were the most successful as during the 50s, the club won the Yorkshire Cup twice as well as the Yorkshire League before the real glory days in the 60s when the Challenge Cup was won 3 times as well as the Championship which was finally won in 1967 and then again in 1968. 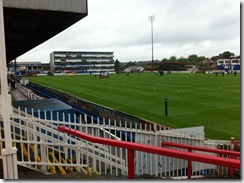 When the summer era of Rugby League came in with the birth of the Super League in 1996, Wakefield along with Castleford and Featherstone were down to merge to form a new team called Calder. While Wakefield voted for this, the other two didn’t and Wakey missed out on the SL by finishing below 10th spot in 1995. (13th) They won promotion to SL for the 1999 season and started off ok, although they did end up in relegation battles in 2001 and 2005. 2006 also saw a relegation battle as John Kear came in but they missed the drop due to the “Battle of Belle Vue” game where Wakey beat Cas 29-17 to send the Tigers down. Recent times have been hard as the ridiculous licence system came in. Administration hit in 2011 and it looked like relegation would happen too as it was expected Wakefield would lose their licence but Crusaders pulled out and Wakefield lived again in the SL. 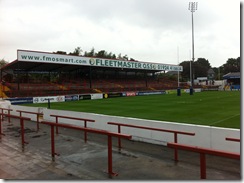 Belle Vue is a ground that splits opinion. Home of Wakefield since 1879, it does show its age and is one of the reasons why Wakefield have been close to losing their SL license twice. Two sides of the ground have terracing with the West Stand being uncovered and running down the side of the pitch. The North Stand is also a terrace but now has the added bonus of a roof which was much needed for the miserable weather this game was played under. The East Stand is the only seated stand which looks like it may provide a decent view of the action as well as being an old structure that fits in well with the rest of the ground. The South side holds the corporate boxes which looks like a block of flats lumped at the back of the ground as well as the clubhouse in the corner of the ground. While Belle Vue has its critics, I love the ground as it is proper old school. Is it unsafe? No. Unfit for purpose? No. Fans of the plastic fantastic corporate hell need to take a good look at their soulless ground before lambasting this one. Belle Vue’s days look sadly numbered though as Wakefield are awaiting the outcome of the planning referral for their Haymarket development which is due on June 19th. A positive outcome to that should see Trinity play there around 2014. 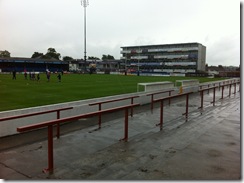 On the pitch, Wakefield are improving slightly since the debacle I watched at the Twickenham Stoop back in March. After a few defeats (and a win over Salford), a win over Castleford at Magic Weekend has seemed to kick-start Wakefield’s season and were coming into this game against the Broncos in much more confident mood. The Broncos were the complete opposite however as since that 36-0 win, they had lost all 7 games (to Catalan x2, Leeds, Hull KR, Bradford and Hull) and were floating around the bottom of the table with tinpot Widnes. Not many (if any) away fans seemed to have made the trip which could have possibly meant, I was the only person to travel from London for this. Even with the poor weather, just under 6,000 were here and there was a decent atmosphere as the game kicked off. 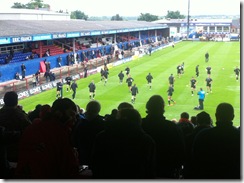 Watching from the dry of the North Stand, I was a little concerned at how Wakefield would start as within 5 minutes of the London game we were already a converted try and penalty down. A better start was needed and Broncos kept giving away penalties early on for staying too long in the tackle. One of those penalties was converted on 5 minutes though as Ali Lauitiiti put Vince Mellars through for the opening try. Sykes converted a penalty to make it 6-0 before Tim Smith split a static away defence to put Dean Collis over and it was 12-0 with only 20 minutes gone. The standout try came around the 30 minute mark when Lauitiiti received the ball around the 10 metre mark. He smashed his way through four defenders before going over to give Wakefield an 18-0 lead at HT. It was looking very good! 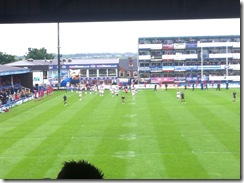 Broncos did come out for the 2nd half and put Wakefield under a wee bit of pressure but the defensive line held firm before Broncos had a man in the sin bin. Michael Robinson crudely stopping a quick restart and deservedly went off. It got worse for Broncos as attacking with a man advantage Wakefield scored their 4th try when Danny Kirmond went over. At 22-0 it looked easy but Broncos took advantage of some slack defending for the first time from Wakefield as Scott Wheeldon scored with Shane Rodney converting. If it looked like Broncos would start a late surge a needless penalty conceded from them allowed Sykes to kick another two points over and end the belief that Broncos could come back. Sykes had a kicking rate of 4 from 6 which in the conditions was a decent rate. While the rain continued to hammer it down and the wind got stronger, Wakefield played out the majority of the last few minutes with the ball in hand but could not add anymore to score. A fairly comfortable win in the end. 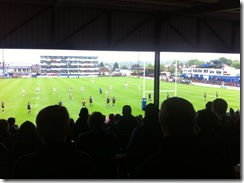 Wakefield’s excellent form continued into their next game as a stunning 20 point come back saw them beat Hull 32-30. Broncos unsurprisingly beat Championship side Widnes 28-24 to move off the bottom of the table to make the fight around the bottom interesting for the next couple of months. While the conditions were terrible and it wasn’t the most exciting game of rugby league I fully enjoyed my first visit to Wakefield and I will certainly be back for a few times before the Wildcats move to their (hopeful) new ground at Haymarket in a couple of years. Despite the fact I have no connection with Wakefield, I love the fact I’m a Wildcat. Mr Macmillan, thank you.

Photos from Wildcats vs Broncos 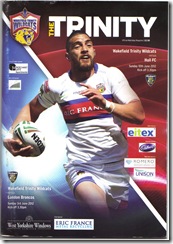 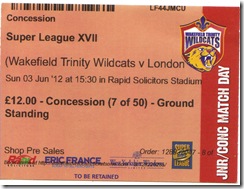