I was meant to start my season 3 days ago (Saturday 16th) and e-mailed 4 clubs asking about details for their friendlies on that day. In the end, I did an extra shift at work as I received not one reply from any of the four. I did not want to drive to places to find the game had been moved or cancelled and I do appreciate that these are friendlies. The benefit of these games are for the players rather than the spectators. But it is poor form for clubs to just ignore e-mails totally.

If I find out that the person I e-mailed was unavailable when I mailed them (I did give 2 weeks) or that e-mail address is no longer used (in that case then the club needs to update it’s contact details) then I will issue an apology straight away. However I doubt this will be the case.

The clubs above (Bideford, Topsham Town, Liverton United and Budleigh Salterton) were the clubs who just couldn’t be arsed and so it seems unlikely I’ll be visiting them anytime soon.

That being said this coming Saturday is another Saturday and I will be off to a game with it being 95% certain being Truro City vs QPR. A ground I have wanted to get to for some time so it should be a good one! 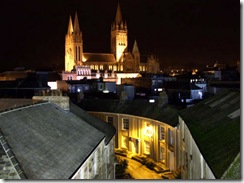 (The grand Truro Cathedral – with its team on the up)