When you moan at how bad your sports team is currently doing you must ask, “why do I support this bunch of shite?” Many answers will be given, parent(s), geography, liked a certain player or style of player? Or how about picked them out randomly from a hat? That’s the situation I found myself in when picking what RL teams to support after searching through them all and feeling no real tie to any of them. Randomness would be the game and my Super League team of Wakefield Wildcats will one day get a blog report when I eventually witness a game of theirs, but today it was my non-Super League team in action, Gateshead Thunder. 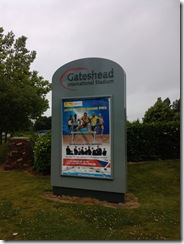 In true ‘Travelling Fan’ blog style… Gateshead is a large town just on the South bank of the River Tyne. Together with Newcastle, it forms the urban centre of Tyneside. Although I have been told to say that Newcastle is far better by my girlfriend. Gateshead has had a settlement since Roman times, but it was probably in better shape back then as until fairly recently Gateshead has been thought of as a bit of a dump. Best summed up by a woman who was denied entry into England before 2007 as her reason of wanting to go to Gateshead was “not credible”. The Heed is on the up though with a lot of improvement and regeneration works starting by the Quayside and city centre. The Metro Centre, the largest shopping centre in Europe is also here, as well as the Sage, a large concert hall. Also in Gateshead is the International Stadium, mainly used for Athletics, but also home to Gateshead FC (currently) and Gateshead Thunder RL. 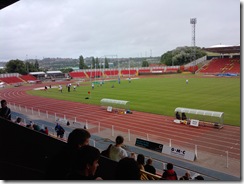 The International Stadium is quite similar to Meadowbank in Edinburgh but with the added bonus of that the Gateshead’s stadium has been looked after. I had been warned about going to stadiums with running tracks and the like around them as the view could be quite poor, however with my good eyesight and a seat a decent way up the stand meant I had a fairly good view of the action. This was in the main stand, the Tyne and Wear which was the only one open for the day. Improvements are being made to the ground and that includes the new roof on top of the East Stand, new changing room block and reception area amongst other improvements. It means the ground, once all improvements are done, it should be a fairly impressive ground that Thunder Rugby would be proud to use for their home games. (Picture below is artist’s impression of new ground) 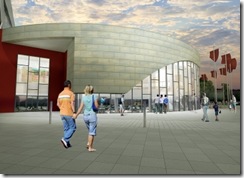 As for Gateshead Thunder, this season has been just been great to be playing rugby after years of previous mismanagement finally caught up with them in 2009 as they went into liquidation and were relegated a division to the Co-operative Championship 1 (technically Level 3 of the RL pyramid) and deducted 6 points for this season. Thunder announced that they would fight on with the squad they had, but only set a target of getting back to 0 points for the season and to build for the future. Obviously, some absolute rapings have come their way, such as a World Record defeat at Blackpool RLFC when they were narrowly beaten 132-0. They have picked up 4 points this season, a win over London Skolars and a narrow defeat to Doncaster RLFC (you get a bonus point if you lose by 12 points or less) to take them within 2 points of their target of 0 points. The ex-Super League team, shamefully removed when Hull wanted a SL license, still have a decent fan-base coming for games and the first signs of roots starting to plant are becoming visible. They welcomed today the Roughyeds of Oldham who were in a decent position in the league and went into this game in 2nd position, 3 points down on top side Hunslet, but a game in hand. They also had just moved to a new stadium, Whitebank Stadium which is a great move for one of Rugby League’s oldest clubs. Their recent history has seen them miss out on promotion 3 seasons in a row due to a Grand Final defeat, but for 2010, they seemed to be well placed for a crack at automatic promotion going head to head with Hunslet. 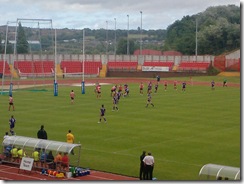 Oldham were clear favourites to win this but Thunder made the better start by managing to get through a couple of sets, helped by Oldham’s ability to give away turnovers to Thunder and some early pressure nearly saw them over the line. However, Oldham came back into it and began to make their strength in the middle count as they broke through the Thunder line a few times but were stopped from scoring by sloppy play or greediness. It was only a matter of time before the Roughyeds scored and when they broke through the Thunder line close to the try and line, Fogerty scored the first try on the 15 minute mark. Thunder seemed to then collapse as they had sadly done too often this season and Oldham scored another 4 tries in the first half. Although ‘Heed were in sight at half-time of a bonus point when a good turn and pass from Heed’s centre found Neighbour who crashed over and then Scott converted to make the score at half-time 22-6 to the visitors. 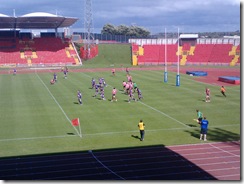 Heed started the 2nd 40 better, just like the 1st half and almost managed to score a quite surreal try early on when Oldham gave away a penalty around the half-way mark and a Thunder forward just ran at the Roughyed defence with their backs turned and only desperate defence from the fullback and right centre stopped Thunder from getting close to bonus point territory. In the end, Oldham managed to rack in 7 tries in the 2nd half as Thunder began to tire and more gaps began to open for the Roughyeds to exploit. Thunder did score a fantastic try midway through the half to stop the constant flow of Oldham tries and conversions as Thunder’s left side showed quick hands and great runners for Bate to storm in a try for the Heed. Oldham kept scoring right up until the hooter, as Ellison who hit Thunder on the burst and finished off the try scoring while McNally’s 9th conversion meant it finished 68-10 to Oldham. 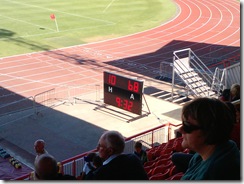 Oldham then avoided the banana skin (unlike Rochdale Hornets who went down 24-22 to London Skolars) of losing to the bottom side, but as I was speaking to a local towards the end of the game, he stated that despite the score, this was one of Thunder’s better performances this season and Oldham were just the better team. Signs are there for Thunder though, a decent crowd (compared to other sides in the Co-op Championship) and with the fans still coming back and even picking up a few new ones along the way (such as me!) then they’ll hopefully be fine and battling for a promotion place sooner rather than later. Good luck to Oldham and their run in for the rest of the season as they clearly have no play-off pedigree so, for their sake, automatic promotion will have to do.

Photos from Thunder vs Roughyeds

- Ground: 6/10 (not too shabby, looking forward to coming here after improvements complete)

- Atmosphere: 5/10 (one loud, very loud Oldham fan made the atmosphere) 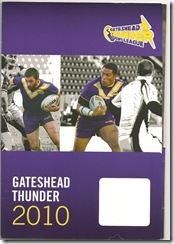 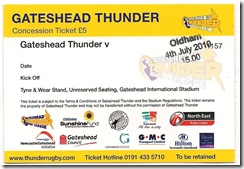