While I don’t do revisits often, there are some grounds and teams you meet on your travels that make you want to go back and see them again. Maybe like that thing in your life that you know is bad for you, but you keep going back because you enjoy it. (Hearts FC might loosely fall into the category) When I left Ladysmead last April, I decided to make a visit to Tiverton an annual thing, and as close to Easter Monday as possible. I do know some other people that do this, like a Scottish groundhopper that always visits Carlisle around Easter time. I have no idea why he’d punish himself like that once a year, but each to their own. I wonder if I will go away with Tiverton if for Easter Monday 2011, they end up away from home, especially if by that time they are playing at Level 8 in the Southern League Division 1 South & West. But this year I had got lucky, very lucky and old foes Chippenham Town were in, erm, town to play Tiverton in this vital Southern Prem clash. 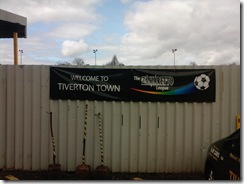 As this is a re-visit, I’m not got to bore you with the extra information about Tiverton or Ladysmead. There have been some changes since I was last here though, firstly the league is no longer sponsored by British Gas, but by “trendy” drink Zamaretto. Described as “Amaretto for connoisseurs” – I was slightly hoping to have a free glass of this upon entry (sponsor the league up a bit!) – but there was none in sight. Or I didn’t look, as I’ll be honest, I don’t know what Amaretto is. Tiverton had also changed since I last saw them at home, they had become rubbish and were in a deep relegation battle to avoid the drop to S&W league where such footballing giants await as Frome Town and VT FC. They went into this game in 17th position (out of 22) and only 5 points off the relegation zone. Some fans round me were worried that if they did get relegated this season, they would fall straight through and back into the Western League. While this might be a wee bit extreme, clearly fans were worried. Chippenham on the otherhand were again in play-off chasing mode and were in 5th place in this game, the final play off spot. But were facing mighty competition from Cambridge City, Stourbridge and Leamington amongst others for it. So, in theory we should have had a decent game on the cards. 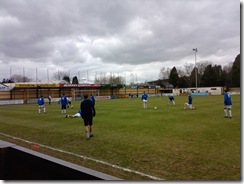 In reality this was possibly one of the worst games I had ever seen. Maybe only marginally better than the game I saw at Minehead in December. Chances were few and far between and the ones that did come were easily saved or missed. Steve Book, was expected the busier of goalies saving well from Chippenham’s strikers. Although in the 2nd half, Chippenham managed to blast an open goal wide when it looked easier to score. Tiverton, again changed both of their front 2 (just like when I saw them at Willand) in the previous week, but again the new pairing could not do a lot and Chippenham goalie Ian Gill never really had to make a save. At the final whistle, both sets of fans were relieved to hear it. As my record 25 game run with no 0-0’s had ended in quite boringly bad style. As a footnote, I had considered watching Tiverton’s other team, Elmore in their home game against Bridport, that finished 2-3. I’ll say no more. 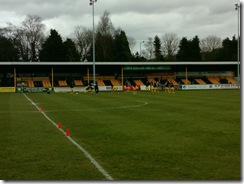 As this is a re-visit, I don’t have much more to say or add, apart from Tiverton need to improve rapidly otherwise they can say hello to Taunton Town and Bridgwater next season. Chippenham may just nab that final play-off spot, but they have some massive games coming up. Massive. Here’s some more snap shots of the game. 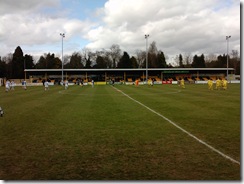 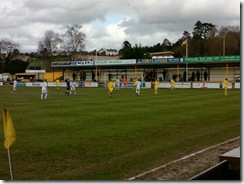 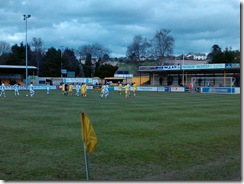 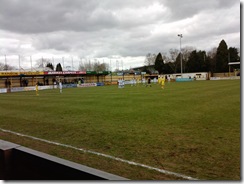 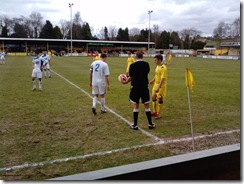 - Value for money: 7.5/10 (bagged student discount this time round) 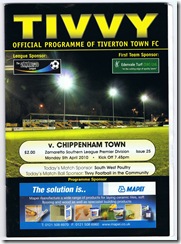 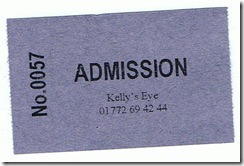