It was another Saturday, it was a Saturday where I would be situated in London and Kentish Town were at home. Perfect, 3rd time lucky for the Copthall Stadium. Sadly though winter seems to have crocked the creaky athletics ground and that match was moved to Hanwell Town. (This is now an obsession) Back to the game list and 7th vs 6th in the underwhelming SSM League was one that interested me. How do you pronounce Ruislip? 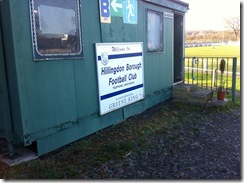 The London Borough of Hillingdon is the westernmost borough in Greater London and it’s population was recorded as 243,006 in the 2001 Census.The borough incorporates the former districts of Ruislip-Northwood, Uxbridge, Hayes and Harlington and Yiewsley and West Drayton in the historic county of Middlesex. Today, Hillingdon is home to Heathrow Airport and Brunel University, and is the second largest of the 32 London boroughs. For administrative purposes, the borough is split into North and South Hillingdon with more industrial units to the south and residential suburban areas in the north. Much of the residential areas were expanded with the extension of the Metropolitan Railway from Harrow on the Hill to Uxbridge in the early 1900s and the gradual establishment of stops along the line, becoming known as "Metro-land". Today, many top businesses have their main Head Offices in the Borough with British Airways and Cadbury plc being amongst others. Also, The borough maintains over 200 green spaces, totalling around 1,800 acres. Since much of the area is within the Metropolitan Green Belt, and as it is one of the least densely populated of all the London boroughs, there are large areas of land properly called open space. They range in size from the Colne Valley corridor to the smallest of gardens. 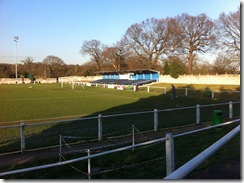 While many other clubs play in the Borough, the one named after Hillingdon itself play on the edge of Ruislip at the Middlesex Stadium. The club have had a varied history since being founded for the first time in 1872. Their original name was Yiewsley FC and played park and local football until 1951 when they became founding members of the Delphian League. 1958 then saw them join the semi-pro ranks of the Southern League and even had ex Newcastle legend Jackie Milburn play for them briefly in the early 1960’s at the end of his career. They became the Hillingdon Borough FC we all know and love in 1964 in line with new local government changes and were playing at the top of the Southern League in the late 60’s when they came 2nd to Cambridge United, reached the 3rd Round of the FA Cup in 1969/70 and reached the FA Trophy final the following season before losing to Telford United. The 80’s saw some tough times however and they disappeared from sight in 1987 before being resurrected in 1990 when Bromley Park Rangers took over the ground in Ruislip and changed their name. They have had some success as this new entity by reaching the FA Vase final in 2006 (before losing to Nantwich Town) and even played in the Southern League 1st Division and Isthmian League 1st Division before finishing bottom of this in 2009, being a massive 18 points from safety. 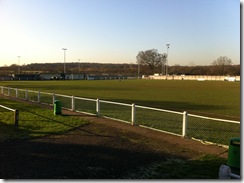 Now playing down in the Spartan South Midlands League, Hillingdon Boro haven’t pulled up any trees and after finishing last season way down in 16th, they were coming into this game in the better position of 7th (out of 22) but a massive 23 points behind leaders Royston Town. One position and 4 points above them were Tring Athletic who were in town for this game. Having finished 2nd last season (the highest finish in their history), being down in 6th is slightly disappointing for Athletic. But having never played higher than this level, days of hosting Southern League football at the Grass Roots Stadium seems to be closer than ever. Hillingdon Borough’s Middlesex Stadium shows clear signs of hosting a higher standard with a silly seated stand behind one goal which reeks of ground grading requirements. The whole ground is quite spacious and the hard standing areas around the pitch are actually set back quite far (for non league level) so you never feel that close to the action. One final mention for the clubhouse, I don’t know the full details but I presume the The Clubhouse is owned by a different company as when I walked in, it felt like I was in a nightclub with funky lights and and staff wearing uniform. Pic below just to highlight the funkyness.

The return game played at Tring earlier in the season had finished 0-0 but was overshadowed by the leg break of Tring defender Brett Court who is still recovering and add the fact that Hillingdon Boro had only conceded 22 goals all season (joint best in the league) I wasn’t expecting many. The home side shot straight out of the traps with Michalis Livesey forcing a save within 2 minutes before a later free kick was curled just wide of the post as Tring already looked on the back foot. The away side came back into it though and on 13 minutes were denied a great goal when a corner was only cleared to Chris Salmon but his half volley was brilliantly tipped over the bar by Sam Beagle. Defensive errors were starting to creep into both sides though as Tring’s Andy Hughes’s backpass was hopeless and with goalie Mike Underwood now in no man’s land he was lucky to see a shot fired wide. Boro wanted in on the poor defence act and on 31 minutes were made to pay when a poor pass was given away in their own area which allowed Graham Hall to run towards goal. While he was crowded out, he slipped the ball through to Reon Thomas who lifted the ball over the keeper for a great opening goal. 10 minutes later the lead was doubled when a poor defensive error lead to Tring having a free kick and it was played in to some seriously poor head tennis which was finished when Matt Jarvis powered a header past the goalie to put Tring 2 up at HT. 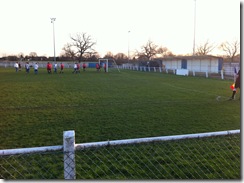 Unlike the 1st half, Tring started out the 2nd 45 dominating play and had the goal which ended the game as a contest just six minutes into the half. When Tring counter attacked, Sam Mitchell was sent away and his low cross was diverted in by Luke Eldridge for an own goal. Boro were now a mess as the back as backpasses were being missed by the goalie and other defensive shambles meant they were normally on the backfoot. This was shown in a textbook example on 73 minutes when a woeful backpass missed keeper Beagle completely only for a defender to just clear the ball off the line. His clearance was only to the edge of the area in true Keystone Cops style which allowed Tring to patiently pass the ball around until Graham Hall smashed home to make it 4-0. Boro did try and get a consolation goal but it never looked like coming. For a side that had only let in 11 home goals all season, this game was not a good day at the office. 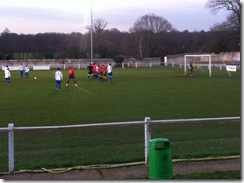 I was really surprised at how poor Hillingdon were in this game as although Tring did occasionally play some good stuff. All 4 goals were of their own making and can have no complaints. Hillingdon recovered though and handed Hertford Town a 3-0 whooping in their next game away from home while Tring Athletic drew 0-0 at home to Holmer Green. Whilst the Middlesex Stadium is a nice venue, crowds are low and so a return to the Southern League for now is a distant pipe dream. A friendly club though so do pop down to Ruislip to pay them a visit! 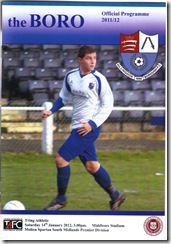