This game wasn’t at all one I had planned to go to as I was looking to get to a midweek game during the 1st week at uni (where you get very little work to do) and Lancaster’s FA Youth Cup game against Chester City was the one I wanted to go to. Yet, with the game being scheduled for a Monday night and the fact I can’t make a Monday night means that idea went right out the window. So 3 of us at uni were checking games and places to go to that were is near driving distance. Kendal vs Kings Lynn came up as did AFC Fylde vs Leigh Genesis but in the end, it was immaturity that won the day. As we chose the Lancashire town of Clitheroe. On first look, you may think, “why is there a town called that"?” However as this is a family blog there will be no clit hero jokes here, and upon further investigation we realized that their opponents today in the FA Trophy (Belper Town) were nicknamed “The Nailers” – and that was that. We WERE going to this game. 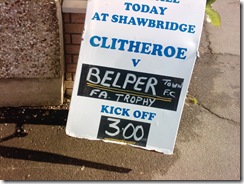 Clitheroe is a town which lies on the Southern edge of the Forest of Bowland (which is an utter pain in the arse to drive around – more on that later) and its main landmark is the castle which sits in the centre of the town. An old Norman keep which is also one of the oldest buildings in Lancashire has a massive hole in the middle of it which was ordered by the government in 1649 for reasons that are beyond me. The drive across the Forest of Bowland from Lancaster University should have been straight forward according to Google Maps. However after driving over a fairly big mountain, we got lost. Badly. Getting lost in the woods is always a problem, however with no or little phone signal and a fairly low amount of petrol (“if you fail to prepare, you prepare to fail”, I know!) this was fast becoming a major problem. We were bailed out by stumbling across the town of Goosnargh and we quickly made our way to Clitheroe coming in on the West side. (Google Maps stated we’d come in to the North – thats how badly it went wrong) By this time it was already 3:30 and then trying to find Shawbridge (home of Clitheroe FC) was also an effort, but it was found and we got inside at 2:57. One final point of how much I balls up this journey was I had forgot to get money out and only had £7 on me. Admission was £7.

Clitheroe play in the Unibond Division 1 North league which is the same league as Lancaster City. Currently having a poor start to the season, they lay in 19th position out of 22. Luckily they had another cup competition to distract them in the FA Trophy. The Trophy is only open for clubs in Steps 1-4 in the Non-League system and more often than not a Conference (Blue Square Premier) team will end up winning the Trophy at Wembley. Last year the winners were Stevenage Borough who beat York City 2-0. Clitheroe welcomed fellow Unibond Division 1 team Belper Town to Shawbridge for the game, who hail from Derbyshire. They however play in Division 1 South which meant a different set of faces from the norm for Clitheroe to play. They came into this game doing well and were in 7th place out of 22nd. This, after losing in the play-off final to Stockbridge Park Steels last season. 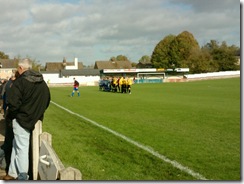 Upon first viewing inside the ground (see picture above) is the pitch – which is frankly laughable. A ‘small’ incline going lengthways up the pitch hinders any sort of football played on here (as we were about to see) and probably hinders any proper ground improvements too until the pitch is flattened. As for the ground, its your typical Unibond ground with mostly standing, although they did have a small seated section running near the corner flag down one end of the pitch. As we were so late in, the game was just about to kick off as we arrived and so took a place near the dugouts to watch the first half which kicked off with Belper making the better chances early on as the wind also played havoc with both team’s game plan. Belper took the lead on 12 minutes when they swung a cross in from the right (up on top of the hill) which wasn’t dealt with well and Lee Stevenson managed to turn his defender and shoot past Danny Hanford. Belper then tried to double their lead as Clitheroe struggled to make any impression on the game, except Alex Brees (who looks about 14) making good runs down the right which Belper struggled to deal with. Clitheroe did grab an equalizer though on 22 minutes after a freekick was headed straight at Belper goalie Martin Kearney. For reasons beyond me though, he only pushed this out into a packed penalty area and ex Lancaster City striker Alan Coar scored a tap in from about a yard out. Not much else happened for the rest of the half as both teams looked fairly even and the wind was hindering both sides. 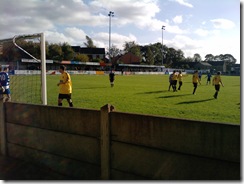 For the 2nd half we all sat behind one goal and watched one of the least memorable halves I have witnessed in football. It actually was a blessing that two uni mates had made the trip as at least we could all talk to each other as the game was so dull. Brees needed to shoot on so many occasions after getting into good positions only to waste it by either trying to play a clever pass or make a successful pass to one of his team-mates who wasted each shot. Belper also had some play, as they actually thought they had won the game on 71 minutes when a Ben Walker shot managed to find its way in after a good cross, but the assistant referee ruled it out for a foul. The final chance of the game came late on when more good work by Brees set up the Clitheroe # 8 (he’s not even in the programme) who ballooned his awful shot over the bar. Full time. A replay to come, which I won’t be at. 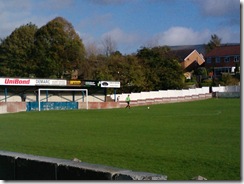 Firstly, sorry was the delay in publishing this (if you were so desperate to read about someone’s trip to Shawbridge!) I have had a surprising amount on in my 1st week back at uni. Secondly, on the game, it all seemed a bit rushed for me to totally enjoy the game. Its a lessoned learned and I have already started to make plans for my next game on Halloween at Bamber Bridge. Finally, as it has taken me so long to get this post out there, the replay actually took place on Tuesday night which Clitheroe managed to win 4-1 away at Belper to go through to the 1st Qualifying Round away at Bradford Park Avenue. (Which PA should win) Overall, a decent ground, a strange pitch and I hope to be back one day when I’m less stressed out!

Photos from Clitheroe vs Belper Town

- Atmosphere: 7/10 (both sets of fans got behind their team) 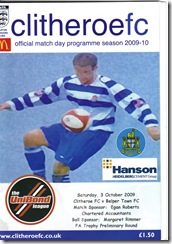